Suzanne Rent chats with ufologist Chris Styles about the upcoming UFO symposium and the events of October 4, 1967. 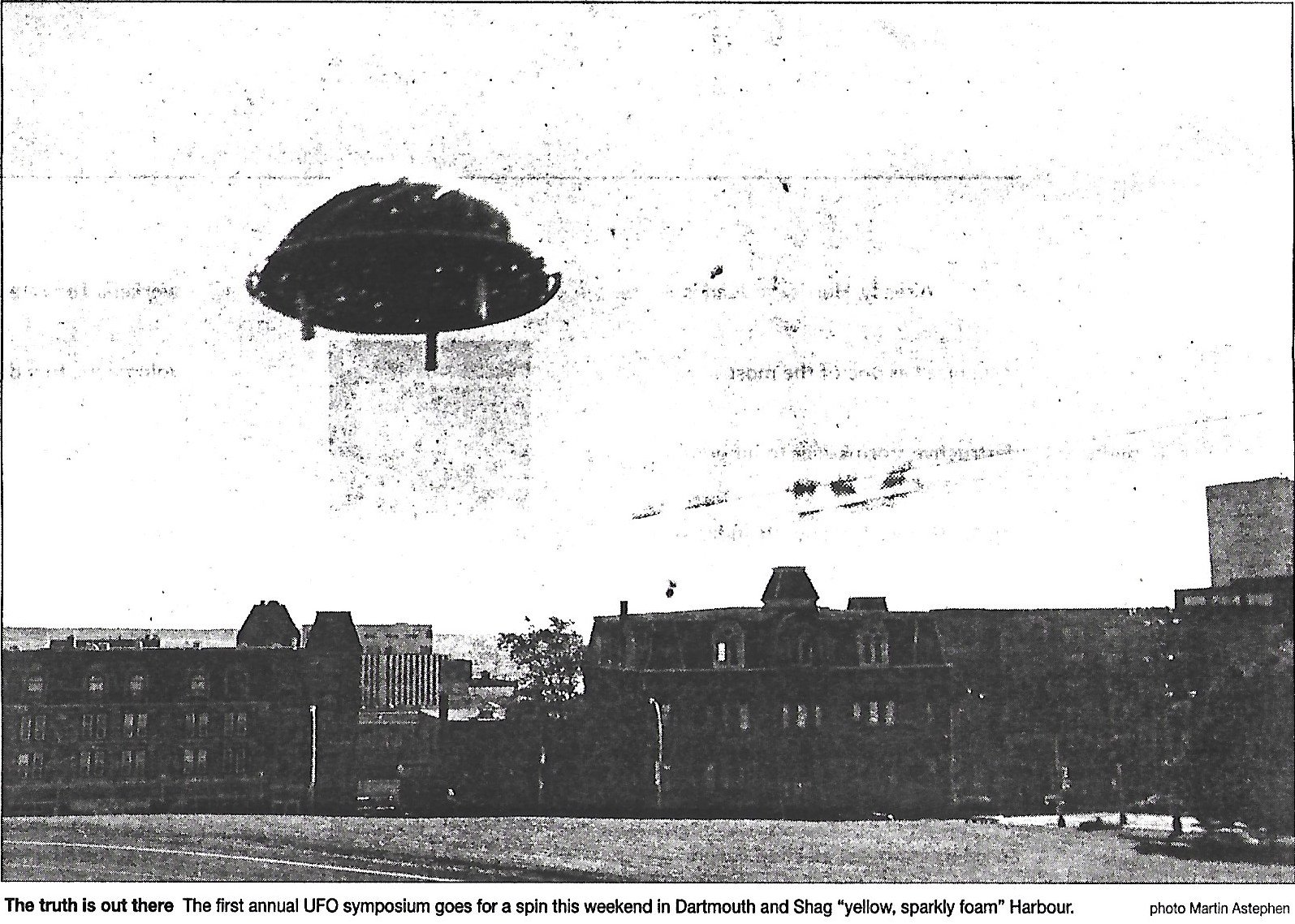 Imagine it’s a dark, quiet, autumn night and you’re driving home to your small fishing village. Your drive is uneventful until something in the sky catches your attention. Flying above the water next to the road is a flat, domed-shaped object with four bright orange lights. Suddenly the object drops onto the water where it floats for about five minutes. And then it disappears under the waves leaving behind yellow, sparkly foam and a lot of questions.

For some of the residents of Shag Harbour, Shelburne County, this isn’t an imagined account. On October 4, 1967, several residents claim to have seen such an unidentified flying object, although a search by the RCMP and military didn’t find anything. On the same night a lot of folks in Nova Scotia saw unusual lights and objects, including 12-year-old Chris Styles who saw something fly through the sky over his home in Dartmouth. Now 36 years later, the Shag Harbour incident is one of the most famous UFO crash sites in the world, just behind the alleged UFO crash in the desert at Roswell, New Mexico.

That night’s infamy is due in part to Chris Styles, now a well-known UFO researcher who has written about the Shag Harbour incident, and researched other sightings around Atlantic Canada. Styles-a part-time care worker by day- along with four other UFO experts from North and South America are sharing their experiences and knowledge at the first annual UFO symposium this weekend at Alderney Landing.

The first day of the symposium will consist of lectures but the second day is when the sightseeing starts: During a trip to Shag Harbour, guests will see the offshore crash site, have an interpretive discussion, meet eyewitnesses to the crash and visit the local post office that has a display and stamps of the sighting.

As much as people sicker about flying saucer sightings and shrug them off as Star Trek-fan delusions, for experts and enthusiast UFO research is serious business. The symposium’s panel of experts is a definitive list of who’s who in “ufology”.

Stanton Friedman is a nuclear physicist who has been lecturing about UFOs since the late ‘60s; David Jacobs is an associate professor of history at Temple University and has studied UFO phenomena including abductions, for over 35 years; Antonio Huneeus is a Chilean-American journalist who has written extensively about UFOs and other paranormal phenomena for numerous international publications; and Don Ledger is a Nova Scotian UFO research who, along with Chris Styles, wrote a book about the Shag Harbour UFO incident called Dark Object.

The symposium was the idea of local filmmaker Michael R. MacDonald. MacDonald first heard about the Shag Harbour crash as a young boy from his RCMP officer father, and went on to make a documentary about the incident a few years ago simply titled The Shag Harbour UFO Incident.

MacDonald says he has always had an interest in UFOs. He has never seen any himself but in the 1980s his parents watched what they believed to be UFOs racing through the sky, being chased by military aircraft for 40 minutes over their home in PEI.

MacDonald says he’s expecting a cross section of participants to show up this weekend at the symposium.

“The demographic is quite wide,” says MacDonald. “There will be 16 year-olds who watch Star Trek as well as 58-year-old grandmothers who saw something in 1967.”

While there may be a mood for tolerance for UFO research in Nova Scotia, Styles says that most Canadians are not interested in the subject. “Canadians are more apathetic. When they didn’t find anything in Shag Harbour people went home and made a sandwich,” says Styles.

But according to Styles, Canadian believers are better informed, because the RCMP is required to document UFO sightings. AS a result, the Shag Harbour sighting is the world’s only documented UFO crash. Many of the military and RCMP files documenting the investigation and search are available to the public at Saint Mary’s University.

Styles says he gets calls from people all over Atlantic Canada claiming to have seen a UFO and after years of research and interviewing eyewitnesses, Styles says he knows the difference between a genuine sighting and something conjured up by a Hollywood-inspired imagination. Styles says witnesses are either so frightened by what they saw they want to forget about it or they become obsessed by the incident like Richard Dreyfuss’s mashed-potato obsessed character Roy Neary in Close Encounters of the Third Kind.

“They say, ‘There was a really bright light, but it didn’t give off an illumination around it. The light was so bright to look at,’” says Styles of the classic description he gets from those who claim they’ve seen a UFO.

Styles continues to search for physical evidence of the UFO that landed at Shag Harbour. IN 1995, Styles conducted a dive at the crash site that was partially funded by Henry Winkler. (Who knew the Fonz was interested in UFOs?) The divers didn’t find anything but Styles is relentless. He hopes to have volunteer divers search again since scientists from the Bedford Institute of Oceanography recently told him about strange sonar readings from the ocean bottom at the alleged crash site.

EJ Jennings has known Chris Styles for 30 years and has helped Styles with some of his investigations. Jennings says he has been out of the UFO loop for a while and is going to the symposium to “see if there is anything new.” Jennings believes in flying saucers and extra-terrestrials and admits he is disappointed he has never encountered a UFO himself. Jennings says non-believers could learn something from attending this weekend’s symposium.

“There are some people who have the audacity to think we are the only ones in the universe,” says Jennings. “Anyone who doesn’t believe should come and observe and I think they would change their minds.”

At 20 years old, Elliott Van Dusen is already a veteran when it comes to researching UFOs. Inspired by shows like Unsolved Mysteries and The X-Files, Van Dusen (nicknamed Fox Mulder by his friends) started researching UFOs and other paranormal phenomena six years ago. He is now director of Paranormal Phenomena Research & Investigation organization, a group that studies paranormal phenomena around North America. He is attending the symposium to meet Stanton Friedman and like Jennings, he wishes he would see a UFO.

“I believe in UFOs but I do get discouraged when I don’t see the proof,” says Van Dusen.

So for those of us who haven’t had the experience of an alien or UFO encounter, what should we expect?

“It won’t look like ET or it won’t be like Close Encounters,” says Styles. “No one will land on your lawn and say, ‘Take me to your leader.’ If we meet a different race there will be no common ground to understand it.”