Believes tarot cards work but has no faith in horoscopes 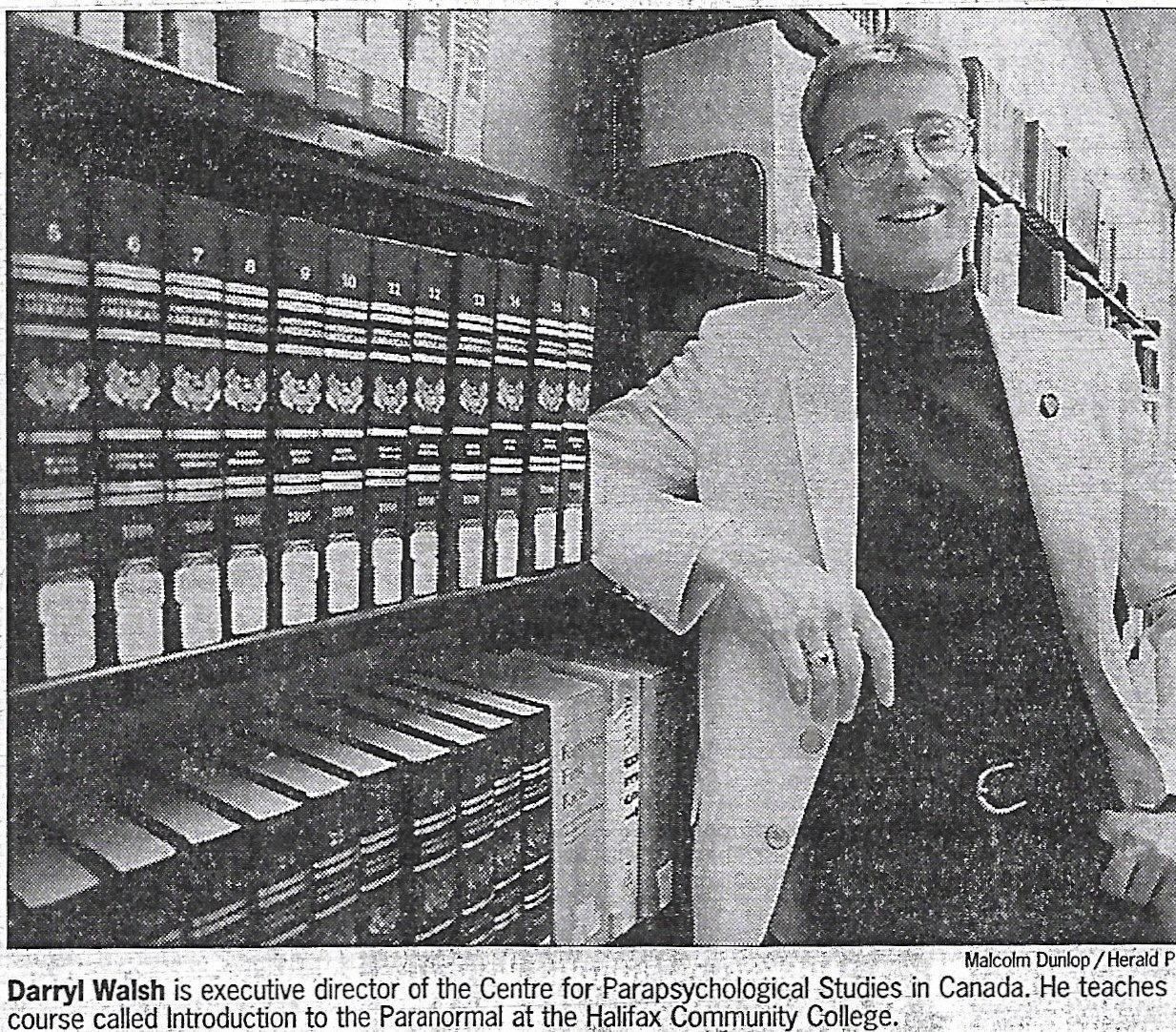 If there is anyone who should see a ghost, it’s Darryll Walsh. He probably knows more about them than anyone else but has never encountered one.

“I don’t know what I would do if I saw ghost. I try not to plan it,” says the expert in parapsychology.

“I’d love to see one, but with my luck the camera wouldn’t be set up or something would go wrong.”

Mr. Walsh is executive director of the Centre for Parapsychological Studies in Canada. He received a PhD in parapsychology from the American International University in California and teaches a course called Introduction to the Paranormal at the Halifax Community College.

The course covers everything from ghosts and ESP to near-death experiences and human auras. It is the only one in Canada that directly deals with the paranormal.

The course, Walsh says, is an open-minded yet scientific-based look at the paranormal. He hopes students find it entertaining but also informative.

People in the small, informal class discuss their own personal experiences as well as learn from Walsh about other aspects of the paranormal.

“Things happen to you and you wonder ‘Was that really something, or am I just going out of my mind?’ and you want to find out more about it,” says one of Walsh’s students.

“I’m sitting on the fence about a lot of things, but I like to see an open mind,” she says.

Walsh comes to class prepared. He excitedly pulls out a colour photograph of a castle he says is in Scotland. He motions to the corner of the picture.

“Do you see that figure? We think that’s a ghost,” he says.

In the corner of the picture is a faint grey image of a hollow face suspended in air.

“We are sending it to be tested to see if it is authentic.”

People join his classes for two reasons, Walsh says. “They either have had an experience and want to learn about that, or they just find it fun and mysterious.”

Mystery is what makes the topic so interesting to people, he says.

Everyone loves to talk about the paranormal and recent trends involving the topic are very obvious, he says.

“It is a bit of millennium madness involved… but a lot of it has to do with the fact that as we get more and more, technological and our society becomes more complex, we are searching for some of the last few mysteries in this world,” he said.

It was the stories he heard as a boy growing up in River Bourgeois in Cape Breton that sparked his interest in the spooky.

“When my aunt and uncle, Phyllis and Basil, would come over, I always knew about an hour into the conversation they would start talking about the good stuff,” he says.

For him, the good stuff was the stories of strange noises and sights they had experienced over the years.

Nova Scotia is a great place to study the paranormal, Walsh says.

“We have such a good cultural background for the paranormal here. The Scottish culture makes for good, old-world stories about ghosts and that kind of thing.”

“In Nova Scotia, we also have a good cultural acceptance of the paranormal. Even if people believe there is a scientific explanation for something, they will usually agree that it makes for a good story.”

Most of his beliefs are supported by some kind of empirical evidence, he says, but there are some things he just knows are true despite a lack of evidence.

“Often I can’t decide what I believe, while with other things, I have a gut instinct about them”

“For example, there is no evidence that proves that tarot cards work, het I believe they do. However, I don’t believe in horoscopes.”

Hunting for ghosts is something Walsh hopes the centre will begin to do more of. But don’t call him a ghostbuster.

“I hate that term,” he says, grimacing.

The process of looking for a ghost looks good in the movies, he says, but is a far cry from the real thing.

“It is really rare that anything happens while you are there, unless you have the time and money to stay there and wait for a couple of weeks.”

“We have heard about a woman who lives in Dartmouth who apparently has a ghost following her, so that might be an opportunity to actually see one.”

The process of determining if there is a paranormal presence involves setting up cameras, thermometers and taking a lot of pictures with the hopes that something is caught on film.

So Walsh will keep searching for some sign of a spirit but says he doesn’t expect to come up with the definitive answer as to what ghosts are and if they really exist.

“We are not about finding indisputable proof that ghosts exist. We really just want to know for ourselves.”