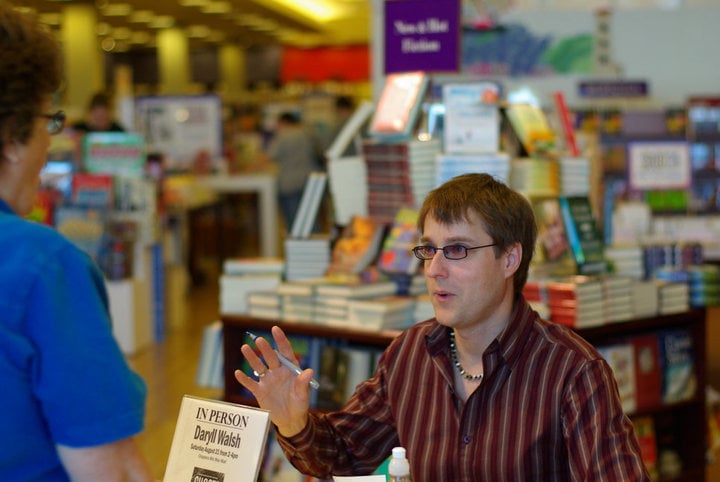 Springhill – Is he a ghostbuster? Well, not quite, but Darryll Walsh, an author and teacher out of Halifax, along with a few other associates, does perform investigations of parapsychological phenomenon, somewhat similar to that of the characters in the well-known Bill Murray/Dan Aykroyd movie.

At this point you’re probably wondering why a Halifax-based outfit that deals with the paranormal would highlight the beginning of a story that is based out of Springhill. Is someone there living in a haunted house?

Well, maybe, but that’s not what this story is about. Though if that is the case, this person will get the opportunity to confer with Walsh when he arrives at the Springhill Library Friday, October 19, to read ghost stories as part of Nova Scotia Public Library Week.

Walsh, who authored Ghosts of Nova Scotia about a year ago, is an instructor at the Nova Scotia Community College in Halifax, steering willing students through the intricacies of the paranormal.

About five years ago, he and several other parapsychological experts established the Centre for Parapsychological Studies in Canada and began investigating reports of haunted houses, ghosts and other strange phenomenon within the province. What started as sort of a side project has begun to snowball into a second career; with chapters since established in Bew Brunswick, Prince Edward Island, Ontario and British Columbia.

“I guess the release of the book (Ghosts of Nova Scotia) kind of got the ball rolling,” Walsh said. “We’d get a few calls here and there, a lot of them not really anything at all. But after the book came out, a lot of people started reporting what they thought might be what you’d call paranormal.”

Walsh will be relating stories form the book as well as some new ones when he speaks in Springhill net week, and will also be asking audience members to relate stories they’ve heard or experienced.

“I’m going to discuss my background and what I do first,” Walsh said. “Then I’m going to read some stories. Then I’ll ask questions, and hopefully audience members will have some stories to share of their own.”

Walsh will also be discussing what may, perhaps, be Cumberland County’s most famous haunting.

“I’ll also be talking about Esther Cox,” Walsh said. “She was a poltergeist that haunted the old Canadian Tire building in Amherst around the end of the 1800’s. So they’ll be some interesting local flavour in our discussions.”

Walsh, the executive director of the Centre for Parapsychological Studies in Canada since its initiation, says they will investigate anywhere from three to five ‘real’ hauntings a year, and one day hope to prove the existence of paranormal activity.

“We believe we can scientifically understand the paranormal,” Walsh said. “Science is a neutral tool. If we can establish a true haunting, and use the proper intensive equipment to measure the activity there, we believe we will find results.”

Walsh noted the comedic boost he receives from observing the behavior of “psychics” when he explains what he does.

“Most psychics run like hell when they hear we’re coming,” he said. “The fact is, not very many people are truly psychic, and most of the ones that are don’t go around doing $75 readings.”

Ultimately, Walsh believes one day the paranormal will be as understood as the normal, through scientific endeavour.

“Ghost must come from another realm,” Walsh said. “If they do come back to our environment, they have to affect our environment. I believe some day we will be able to measure that using quantum physics. Until then, we have to use what we’ve got.”

Walsh’s next book, Ghost Waters, a chronicle of paranormal activity at sea, including everything from ghost ships to buried treasure, will hit stands sometime this winter. Ghost story readings at Springhill Library start at 7 p.m., Friday, October 19. There is no charge and all are welcome.