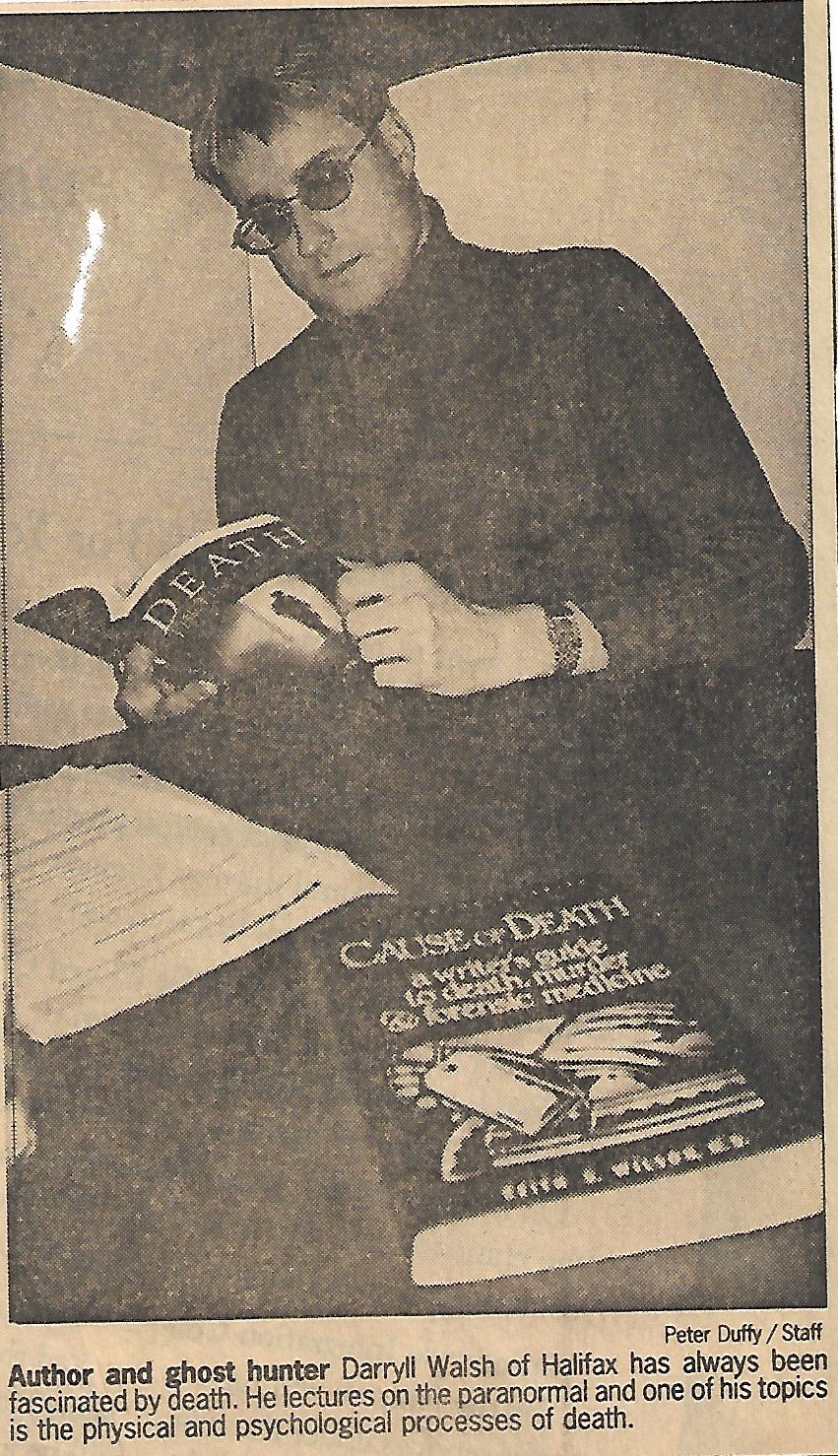 Brrr, Goosebumps! It’s mid-afternoon, broad daylight, and we’re sitting in a busy Halifax restaurant. But what Darryll Walsh is telling me makes the hair on my neck stand up. Brrr!

You see, this guy’s a ghost hunter (seriously!) and he’s full of some pretty spooky tales.

Darryll is quite the surprise. When I arrived for our interview, I did a double take.  I mean, just look at him: more like a tall, gangly 19-year-old (albeit with good clothes sense) than the respected academic I was expecting. In fact, I almost didn’t believe him when he told me that he’s 36 and has an MA and a PhD under his belt.

Darryll is executive dire tor of a national organization called the Centre for Parapsychological Studies in Canada. It includes ordinary folk, like Darryll with an interest in ghosts, apparitions and near-death experiences. “I love a good story,” he tells me, “true or not.”

He pauses and grins at me. “I’m not a flake, honest!” he says. “I’m schooled in hard science and social studies.”

Darryll isn’t out to answer all the “big” questions, such as: do we survive death? What exactly is a near-death experience?

Darryll and his fellow hunters have several ongoing investigations. Ge mentions paranormal goings-on that had been rumoured in several empty Halifax houses. Unfortunately, the dwellings were demolished before a serious investigation could be mounted.

“You get SO close,” he exclaims, dancing in his seat, “then something very mundane stops you.”

Is there a living to be made hunting ghosts? He shakes his head.  He keeps body and soul together by working as a bartender at a Halifax social club and teaching parapsychology courses at Nova Scotia Community College in Halifax. (One starts next Monday, another in late November). He’s also written a book listening 139 haunted sites in Nova Scotia. It’s due out next July.

So has he ever seen a ghost? He’s not sure. Once, he woke and saw something by his bed wearing a black cape and what looked like a sombrero.

Two years later, he remembers walking to find two black demons sitting casually on the foot of his bed. This time, he fled.

I shiver and he chuckles again.

“It was a dream,” he says. We talk about the difference between ghosts and apparitions. I tell him, that quite honestly, I never knew there was a difference. Oh, but there is he assures me. They’re entirely different.

Ghosts are energy and emotion, imprinted on a surrounding.

“A ghost is a dumb recording, a silent picture being replayed over and over again.” Not so an apparition. “An apparition is a spirit,” he says. “It tries to interact with the environment as a person. It tries to talk or effect change.”

Darryll tells me about some of the groups other investigations. He says they’re interested in a Waverley graveyard where Oscar Wilde’s ghost supposedly prowls. Seems the famous Irish playwright visited the area in the late 1800s.

There’s also been something called “a portal haunting” reported in a house in Lower Sackville. A what? Darryll says a portal is supposedly a doorway to “the other side” allowing spirits to come across.

“I’m not sure I entirely subscribe to it,” he says softly.

This is fascinating, eerie stuff. We chat through the afternoon.

“I’m not trying to reach the dead,” says Darryll at one point. “I’m trying to get at some … evidence pointing to there being something, that we don’t just breathe our last breath and then (comes) the blackness.”

And what’s his conclusion so far?

“The evidence is that there is indeed something, some aspect of us, that continues after death.”

I study him for a long moment. Does he really believe all this?

“I believe wholeheartedly in ghosts, and near-death experiences,” he replies, good naturedly.

“In everything else, I’m just a neutral researcher. But I’m open to being proved wrong.”

One afternoon, one of the women was lying in the living room watching TV. “She looked out the window and here’s an old woman looking in at her. She went over to the window but there was no one there. No sign.

Not long afterward, her husband saw “something” upstairs.

Now the group plans to conduct an intense investigation of the house. Members will be moving in with cameras, tape recorders, a thermometer and a machine called an electromagnetic force meter. Then they’ll settle down to wait for … whatever.

“Darryll,” I hear myself say, “can I come along to see these, these ‘things’ for myself?”

Sure, he says, promising to let me know when they’re ready to go in.